Naked mole rats are among the ugliest creatures in the animal kingdom, and they engage in acts that seem repulsive — such as eating one another’s, and their own, faeces. … Now researchers have found one biological motivation for this behaviour. When a queen mole rat’s subordinates feed on her hormone-filled faeces, the resulting oestrogen boost causes the beta rats to take care of the queen’s pups … […] Like bees, naked mole rats live in eusocial colonies, with only one queen rat and a few males that can reproduce. The rest of the colony consists of dozens of infertile subordinates that help with tasks such as foraging and defending the nest. The subordinate rats also take care of the queen’s pups as though the babies were their own: they build the nests, lick the pups and keep them warm with their body heat. 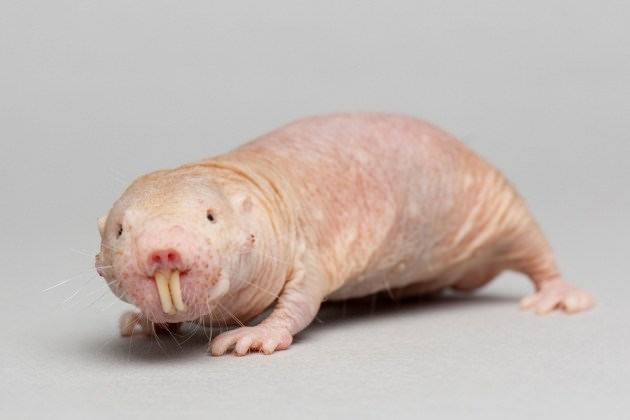 Sue Carter, a behavioural neurobiologist at Indiana University in Bloomington, says that the animals’ method of transferring parental responsibility through faeces is interesting.

Thank You. Only when we truly know them, can we act accordingly.
Are you familiar with my 'Does a worker ant know it's a worker ant' theory?
Top

What is a Bugman?

Aesthetically they’re much like their name, bug-eyed, jittery and insect-like, their very demeanour often makes one’s skin crawl. You’re more than likely surrounded by hoards of these bovine-esque people in day-to-day life. Culturally of course they’re near impossible to pin down for they cut all cultural roots at the base in fear of representation with the past. Politically many say bugmen are ‘left-leaning’ yet I’d argue the case that any affiliation with politics is entirely with the curve of the populous and thus the Bugmen – at present – inject themselves routinely with viral strains of progressivism, neoliberalism and (especially) democracy. Projected from this ambivalent attitude towards history and politics comes anti-empathetical extroversions with regard to tradition, myth, folklore, spirituality and interest, all of which, when positioned in relation to a bugman are used only alongside heavy doses of postmodernist irony. The simple matter of fact is they have zero respect or tolerance for anything antiquated or traditional, the most minor of historic morsels that doesn’t actively sell itself to them or project their personal vision of infantile-tech-utopia is cast aside. Philosophically the bugman is relatively confused, often mistaking logic, reason and rationale with one another, and replacing the idea of basic causality with their own drawn-out narcissistic assessment attempts: “Look at me, I’ve got it all figured out.” the bugman says internally.

Before you sits the social nervous system of the bugman true, a sordid mixture of fad-reverence and capitalist-lite binging. On closer inspection of the day to day life of a bugman one finds at its core the implementation of social erosion, everything that is taken from its origin is likewise bastardized into a regressive, virtual, stir-crazy version of its former self: eSports, Fantasy Football, Copy ‘n Paste Vidya (à la Bethesda/Ubisoft), New Atheism, Beards-as-personality, etc. each of these characteristics is of course filtered through the latest piece of cutting-edge high-brand technology the bugman can afford. One may have noticed already that bugmen’s ‘personalities’ are nothing more than the accumulation and composition of various popular brand names, technologies, TV shows, bands etc. The bugman is entirely defined by that which they consume. Thus the bugmen easily assimilate into their own groups, for their archetypes and traits are based off material possessions, as such grouping is quick, painless and has the added benefit of instantaneous conversation: “Sweet mechanical keyboard dude!”

There is of course a difference between a regular consumer and a bugman, there has to be, for everyone consumes. Whereas a consumer will buy a basket of groceries which they plan on eating, the bugman will purchase retro foods, meme-drinks and ironic status-tokens as a means to display the fact that they are indeed ‘in-on-it’. A consumer will buy the box-set of their favourite TV show because they genuinely enjoyed the viewing, perhaps they’ll watch 3-4 episodes a week around other commitments, a bugman on the other hand subscribes to multiple streaming services and binges series after series in the ever expanding quest for acceptance, when asked how they found Stranger Things, Rick & Morty, Bojack Horseman, Breaking Bad, Game of Thrones etc. the bugman does not offer insight into their personal opinion, only regurgitates a titbit or quote from the series as a means to display their virtue of consumption. “I too have seen the thing you have!” A network of insects whose lives are routinely controlled by ratings: theirs and others. They must advance their rating by subsuming the other which is rated highly. ‘Everyone liked this, so if I like this, everyone will like me!”

Identity and consumption merge within the bugman. Hobbies become traits in the lives of bugmen. Treating their lives like as if they were an RPG minmaxer, attempting to reach peak efficiency when it comes to popularity, assimilation and acceptance. Spewing spools of popular quotes, band-names, aphorisms and social tics, the bugman is a walking media depository incapable of its own creation. Bugmen’s ‘own’ thoughts are merely misshapen combinations of that which they’ve taken in. Revelling in their ironic displays of lower case postmodern hyperbole and sardonic middle class humour. Sincerity an impossibility for worry of social suffocation, and daft humour avoided for fear of ostracisation. When a bugman sprouts anew, the previous form of personal agency commits seppuke out of respect for others. That jittery man whose bulbous eyes are darting to and fro, the one in line for the new iPhone, that’s a bugman, consumed by the idea of being first in a line of consumers, any possibility of escape is negated by the perpetual oppression and quasi-innovations of consumerism. Just as the man’s soul glimpses at the sight of a beloved memory, his perception picks up an advert, and so the memory fades into non-existence.

It is important to understand that there are 'Natural Laws' that govern our reality. We live in a binary reality. I explain this (I hope) in the 3state thread.

That said, the natural laws that apply to the entirety of our reality also apply to us. Human hubris - in particular, self-importance - lead us to consider ourselves, as we move forward in time, to be at the peak of understanding about the reality around us. Of course, tomorow will offer new insights and todays understanding will be considered archaic. But we do hold on to a lot of old misconceptions because that's the way Nature intends.

When it comes to sentience - Nature is extraordinarily fair. Nature encourages progress - until usefulness is lost.

I'm waffling slightly. Get to teh point.

Look around at Nature and the systems it has in place to ensure the relatively smooth forward-motion running of everything. As an example, evolution is a process towards becoming more competent in terms of survivability in any given environment. Then take a look at how Nature has ordered societies in our reality. Land-based socially-driven entities that dwell together in large groups (humans, bees, ants, termites, mole rats etc) have a basic social structure that has determined the continuation of those particular species well beyond that of other less socially-driven species - and if any doubt about that claim persists, just think about how many other less socially-driven species exit this plane through extinction every day at the hands of the most powerful of these socially-driven species - humans.

Does a worker ant know it's a worker ant?
Land-based socially-driven entities that dwell together in large groups have a defined and observable structure. There are The Royals At The Top. These appear to be the priviliged few - serviced by an army of less valuable members of the society - but vital to it's continued existence.

In a system of heirachy - you know, the one that we exist within, just like all the other species in our grouping - this is always the case. The worker ant does not have the requisite cognitive function to question it's own place within it's own society - Nature has not given it that ability, to ensure the continuation of the species.

Human society was no different. Until recently - BECAUSE WE ARE CONTINUALLY EVOLVING AND IN PARTICULAR, OUR CONSCIOUSNESS IS EVOLVING AT AN INCREASINGLY FAST PACE.

There are a vanguard of people in the world that are at the spearhead of this evolution. They are beginning to see a glimpse of the outline of 'how things really work'. The Kings and Queens that Nature placed in power to ensure the continuation of our species HAVE BECOME REDUNDANT. In fact, we are reaching the point where they are actually DETRIMENTAL to continuation. Nature is pushing this evolutional awakening as a mechanism of survival to ensure the continuation of the human species. Nature is balanced, and always fair.

To anyone reading this who understands the implications - YOU ARE POWERFUL. Don't be afraid of power. You will use this power to better the human condition. We can laugh these old KIngs and Queens from influence because their ideas are so old and ridiculous. They have served Natures purpose, but Nature is indicating that new stewards are required that are answerable to everyone. We have the means to consult everyone through technology. A concensus can be reached on what we need to do to relieve everyone of their fears. This is an inevitable paradym shift and it is going to mean ENORMOUS changes but these changes will be EXCITING and MEANINGFUL. YOU WILL FEEL GOOD ABOUT YOURSELF.

Climb on board and let's get this train moving.
Top